For decades, motorists visiting downtown Corpus Christi would find themselves traveling in the wrong direction when commuting between Shoreline Boulevard and Wat 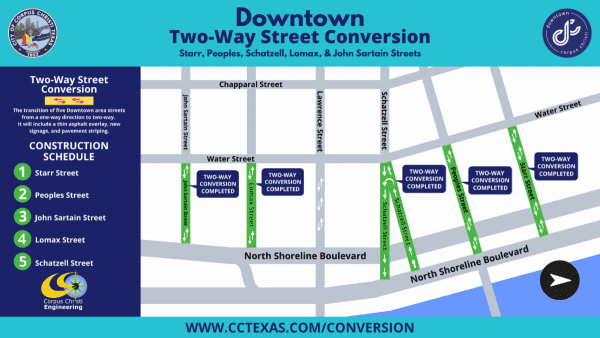 er Street. This confusion led to an influx of complaints regarding wrong-way drivers. To combat the confusion, the Downtown Two-Way Street Conversion project was planned.

As part of the Downtown Reinvestment Zone’s (TIRZ #3) Planning and Traffic Analysis, this project was planned to convert five one-block, one-way portions of streets turning off Shoreline Boulevard into two-way roads that connect to Water Street. In addition to converting traffic direction, the project also added a thin asphalt overlay, new signage, and pavement striping.

These five conversions took place one at a time, starting with Starr Street and ending with Schatzell Street. The other three streets that undertook the conversion project were People’s Street, Lomax Street and John Sartain Street.

“This long-needed project being completed is yet another example that we are past the days of plans sitting on a shelf! We are grateful the City provided the leadership to get this project completed” said Alyssa Barrera Mason, Executive Director for the DMD.